Provincial Government Records Digitized and Made Available Electronically in GATOR

I am pleased to make you aware of several volumes of historical records in the custody of the Province that have recently been digitized and made available through the Province’s GATOR website, which may be of significant help to you in conducting historical research into parcels and surveys across the province.

The Lands Branch, within the Ministry of Forests, has recently completed a significant digitization project to convert many old hard copy records into digital format, and they can be viewed using the GATOR selections shown below: 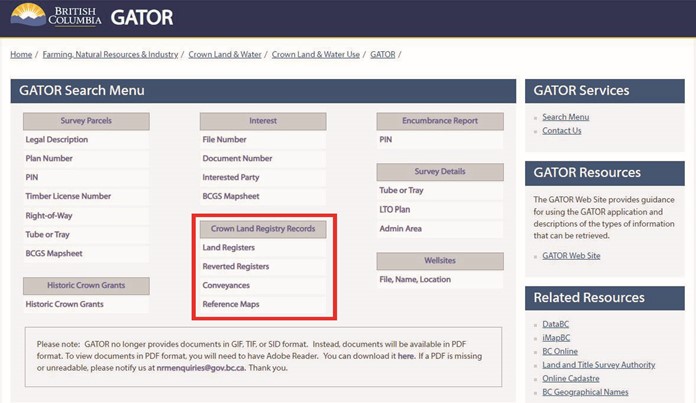 The following provides a brief summary of what the various collections contain.  Additional information is noted on the webpages themselves.

The collection I’m most excited about is the Reference Maps.  These hard copy maps were traditionally used by staff within the Surveyor General and other Lands departments to record and track information relating to parcels, tenures and surveys throughout the province.  The maps are organized by their National Topographic System (NTS) grid designations, and within a given map sheet, there are often several versions relating to various points in time.  They contain a wealth of information on parcels, interests, Crown file numbers and, perhaps of most relevance to us land surveyors, plan and field book numbers for nearby surveys.  These maps are certainly not an exhaustive source but they do represent one more tool for conducting your research.

As an example of some of the information available, the image below is a snip from Reference Map 92K_SW_DATE_1963_NUMBER_2.  You’ll immediately notice the parcel structure and file numbers.  However, the blue-circled entry references a field book (F.B. 239/22 Trav.) and related plan (8 T. 5) from a 1922 triangulation survey that set stations along the length of Nodales Channel; it made ties to a number of parcel corners along the way and noted the evidence that was found.  The field books and plans noted on these Reference Maps are filed in the Surveyor General’s vault and can be requested through myLTSA’s Surveyor General Scan on Demand service in the usual manner. 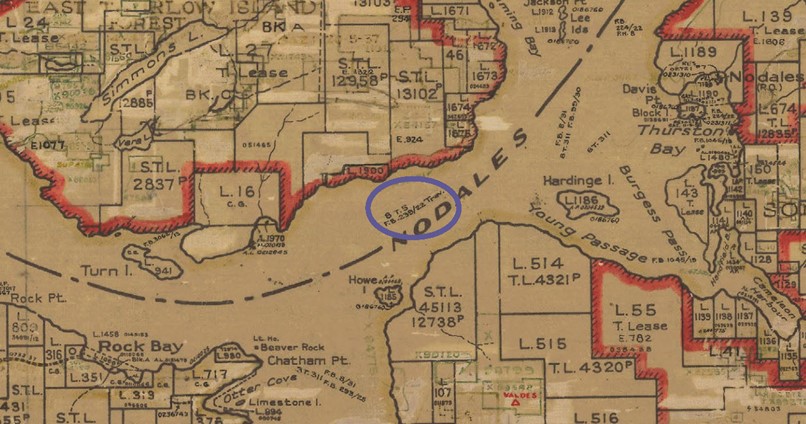 If you have any questions about the survey records that are noted on the Reference Maps, please feel free to reach out to myself or my colleagues.

Any issues encountered with the functionality in GATOR can be directed to CLRHelp@gov.bc.ca.

(Please note there is currently an intermittent problem the Province is aware of and working to resolve:  occasionally, upon clicking one of the links, the resulting page shows that there is “no data available in table.”  The issue is usually resolved by hitting your Back button and re-clicking the page link; this may need to be repeated several times.)