The River has Moved. What do I do?

The River has Moved. What do I do?

Statutory right of way plans that cross both private land and Crown owned bodies of water where natural boundaries do not agree (or, The river has moved. What do I do?)

The following document was drafted by Jeff Beddoes BCLS (N/P), (CLS ret.), with input from Land Title staff, in developing a procedure to address the situation where a statutory right of way plan is being surveyed across a titled parcel and across a Crown-owned creek which runs through the parcel, where the present location of the creek materially differs from its location according to the plan or document upon which title is based. Rule 5-2 of the Survey and Plan Rules require that such a discrepancy is dealt with.

Although the procedure assumes a situation where the creek has actually changed location through lawful accretive and erosive forces; the same procedure would be available in a “natural boundary adjustment” scenario, where the creek remains where it always has been but was incorrectly depicted on the title-defining plan or document. Of course if the water course has moved suddenly, then the title boundaries likely have not shifted location and the guidance contained in this article is likely not applicable.

This is being published in the Link to provide guidance to members on how they may be able to deal with such a situation. Members are welcome to contact the Practice Advisory Department or Surveyor General staff, to discuss their particular project.

The following scenario describes both the problem being addressed as well as a solution.

District Lot 1 was granted by the Province in 1950 to Mr. Smith. The tracing attached to the Crown grant shows the area of DL 1 that was granted in a red wash, and a river which was not granted in a blue wash, as shown on Sketch A. Since 1950, the river has moved slowly to the location shown on the Sketch B. And now, a utility company has strung a new power line across DL 1 as shown on the sketch and wants SRW tenure. In accordance with common law, today Mr. Smith continues to own all of DL 1 above the natural boundary and the Crown continues to own the river, even though the location of the river within DL 1 has changed considerably.

Further, the land title office can only register an SRW charge from the Crown over what their records indicate to be Crown land, being Area 4 on the attached sketch. This of course is problematic because Mr. Smith does not own Area 2 and does own Area 4, and the Crown does not own Area 4, but rather owns Area 2. Section 118 of the Land Title Act can offer some remedy to this conundrum, as it provides a simple mechanism to take lawful accretion, (in the example, Area 4), into Mr. Smith’s title. Unfortunately section 118 does not provide a tool through which ownership of the river, (Area 2), can be taken off of Mr. Smith’s title and returned to the Crown. 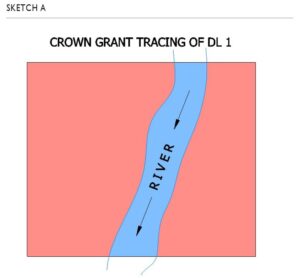 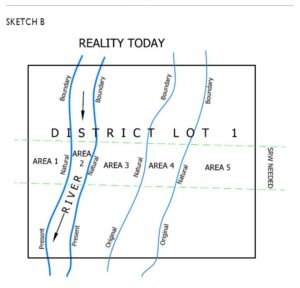 The following is a solution to this problem.